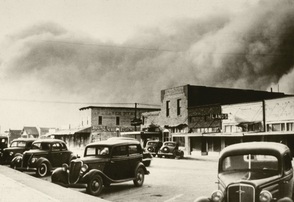 Conservation Districts had their beginning in the 1930’s when
Congress, in  response to national concerns over mounting erosion and dust storms, enacted the  Soil Conservation Act of 1935. The conservation district concept was developed  to enlist the cooperation of landowners and occupiers in carrying out the  programs authorized by the act. To encourage local participation in the program,  President Roosevelt sent all state agencies a State Soil Conservation District  Law. By the late 1940’s all states had adopted similar legislation. 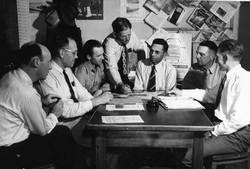 Forming a conservation district in Franklin County was not a readily accepted  idea or an easy task. Five men who had the insight and felt there was a need to  conserve the land took up the challenge. These five men were: Leslie Hunter, Harry Funk, Chester Wagner, Harry Scott and H.M. Ward shown in the Conservation Districts file photo to the right.

Many meetings and three  elections were held before the patrons of Franklin County passed the resolution  to form the conservation district. The official  charter was signed on April 25, 1941 making it the 14th district formed in the
state of Kansas. The Cooperative  Extension Service played a key role in
organizing and assisting the new  districts. 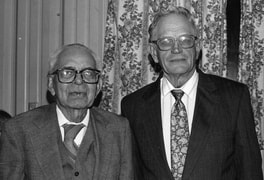 
Leslie  Hunter served the local board for 35 years and served as president of the Kansas  Association of Conservation Districts in 1960. He also served on the Marais des  Cygnes Drainage District board and ASC Committee. Albert Dunbar also served on  the board for 35 years. Albert represented the district on the RC&D Council,  Franklin County Planning Commission and by attending many state and national  conservation conventions.  Pictured above left are Leslie Hunter and Albert Dunbar.


​​
An annual meeting is held each January to report district activities and accomplishments; the meeting is open to the public and is typically held the last Thursday of January.   An election is held during the annual meeting to fill one or two (depending on the year) three year terms for position of board supervisors. The Kansas Bankers Association (KBA) Awards have been part of our annual meeting since 1945.  The purpose of the Banker Award program is to stimulate a greater interest in the conservation of the agricultural and natural resources of Kansas by giving recognition to those farmers and landowners who have made outstanding progress in practicing conservation on their farms. “The continued work and dedication of our award winners each year provide the example of conservation practices that we all need to follow. The land is our long term asset and the proper maintenance of it will help determine our future success and the successful opportunities of the next generation”, said Mike Skidmore, 2010 Key Banker.  The KBA works with K-State Research and Extension and the Kansas Department of Wildlife and Parks throughout the State to sponsor six award categories including Energy Conservation, Water Quality, Water Conservation, Soil Conservation, Windbreaks and Wildlife Habitat.  We have a complete list of award winners dating back to 1945 in the PDF file below.